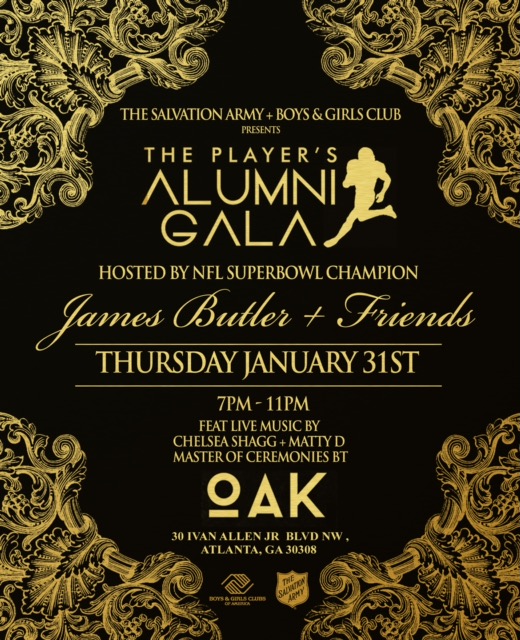 Optimal Fundraising Group will present more than $100k worth of memorabilia with?this year’s auction providing more than100 items including: a Tom Brady jersey, Patrick Mahomes autographed helmet and multiple Hollywood and music memorabilia. 100% of the?proceeds from the memorabilia auction will go to the Salvation Army Boys and Girls Club.

?“I have had the fortune of serving on the board of The Salvation Army Boys and Girls Club of Greater Atlanta since 2014, comments James Butler, Super Bowl Champ NYG. “Our primary responsibilities are to help raise funds and grow awareness. With the Super Bowl coming to Atlanta, I know this event will accomplish both goals. I have worked with this organization since 2001 as a freshman at Georgia Tech. I am passionate about building this long tenured relationship because it is helps at risk youth in underserved neighborhoods.”

James Butler is currently an owner of multi-unit Golden Corral franchises.? He recently graduated from Georgia Tech with an Executive MBA in Global Business.?Since 2014, James has served on the board of The Salvation Army Boys and Girls Club of Greater Atlanta and has been active with the organization since 2001. He is also an active member of the Atlanta Chapter National Black MBA association. In 2014, James was inducted into the Georgia Tech Sports Hall of Fame.

In 2001, James started his career at Georgia Tech where he majored in Building Construction. In his final two years as a starting Free Safety, James totaled 204 tackles, 7 interceptions, 10 pass breakups, 4 forced fumbles and blocked 2 field goals. He was a semifinalist for the Jim Thorpe Award as the nation’s top defensive back as a senior in 2004. James was also named First-Team All-ACC and First Team All-Academic Team for 2004 and 2005 season.

After college, James earned his way on the team with the New York Giants as a undrafted rookie in 2005. In his first two years with the Giants, he was one the Giants top special teams players while seeing only limited action on defense. His third season (2007), Butler earned a position as a starter and helped the Giants defeat the New England Patriots in Super Bowl XLII. James led the Giants with ten total tackles in the game. In 2009, Butler signed a 4 year deal with the St. Louis Rams where he served as a team captain.

James is very passionate about growing awareness and raising funds to help at risk youth in underserved neighborhoods. Since 2001, James has conducted multiple speaking engagements, and hosted youth football camps to help motivate the next generation.

This event is a celebration of The Salvation Army Boys and Girls Club’s commitment to the community through raising funds for a worthy cause servicing close to 1,800 children in the Greater Atlanta area. “This is an amazing opportunity to bring recognition to our organization,” comments Lillian Bryden, Director of The Salvation Army Boys and Girls Club. “Some of the proceeds from the event will be used to upgrade our Teen Centers at our clubs, purchase educational materials, and enhancements to our games rooms.”

General admission is $150 and exclusive VIP admission is $250 per person with a percentage of ticket sales going to the organization. This highly anticipated formal event will feature live music by Matty B and Master of Ceremonies BT. The event will begin at 7:00pm with the silent auction, sponsored by Luc Belaire , followed by hors d’ oeuvres and a private VIP after party at Spy Lounge.

About The Salvation Army Boys and Girls Club